The club meeting night for April was an interesting evening, with the presentation topic for the night being a discussion of Eucalypt growth habits and styles for bonsai, including reviews of a number of trees growing in the wild, and what we can learn from them. In addition, the trees on the display table provided some quite animated discussion amongst members.

The main presentation and discussion for the meeting provided a very insightful analysis of some of the growth patterns and habits of Eucalypts in open situations, and a translation of those into bonsai development. Rod’s presentation was supported by both some very interesting Eucalypt bonsai which he is growing, supported by some very innovative technology, which allowed us to consider in some detail, the environmental forces on trees in the open, and the growth responses by the trees to those influences.

The display table at the meeting featured a good range of eucalypts and some other species, provoking plenty of feedback and comment amongst members.

With the VNBC 2021 Exhibition coming up, this meeting was another workshop and critique night to help members finalise tree preparation for display, as well as to get advice on longer term development for other trees.
Once again, we had a combined physical meeting at the club rooms, along with a good number of local, regional and interstate members logging in on Zoom to be part of the night. As usual, the meeting was also recorded on video, to be made available to members for viewing in the near future.

An interesting range of trees were on the display table, for “show and tell” discussion, and some of these will be on display in the club exhibition as well. These included the following trees.

Some of the other trees put up for review and discussion included….

11 months since our last face-to-face club meeting! It was with relief, and some caution, that the club held its first evening meeting for 2021, after the COVID-related difficulties of 2020. Limits on numbers present in the hall, mask-wearing indoors for everyone, social distancing, no supper refreshments, and all the other COVID-safe requirements were in place for those attending this meeting, but we also had the added feature, at this meeting, of linking in some of our more distant members from Bendigo, Canberra, Sydney, Tasmania and South Australia via a Zoom link as well. It was great to be able to include some of our wider membership at the meeting, and using this feature is a direct result of some of the things we learned during the COVID restrictions of 2020.

The focus for this meeting was a workshop and tree critique night, for preparation of members’ trees for the club’s exhibition coming up in late March.

Quite a few trees were worked on by members on the night, and we had plenty of them brought forward for review, discussion and advice by the group.

Some of the key points made to consider in setting up trees for display included good management of any wiring on the trees; ensuring that the trees can be raised up for display at a height that allows people to view them properly; ensuring that the soil surface is free from weeds and unnecessary plant debris; and use of consistent stone types if rocks are part of the display.

The February Club Meeting featured a comprehensive presentation by Annalea Smith, who provided an in-depth look at the species she selects and the techniques she uses when developing Australian native plants as bonsai.

Annalea works with a wide range of species, and has trouble resisting new finds in nurseries, as well as continuing to work with a range of her favorites, including Eucalypts, Acacias, Leptospermums, Melaleucas, Callistemons and many more.

Most of the plants Annalea grows are tubed stock, so she works with them from their very earliest stages of growth, with root pruning, repotting, pruning and wiring as early as possible and frequently as they continue to grow, to encourage them to develop some of the special characteristics to use for future bonsai.

The success of her approach is very evident in the rapid development of interesting trunks and branching frameworks, so that by the age of 6 years, most of her trees have an excellent structure as good bonsai.

And from the Club display table that night….

The final club meeting for 2019 – a celebration of the year’s activities, a social evening as a club breakup for the end of the year, and a critique of a number of trees and their associated containers. What a good evening it was to round off the year.

There was a good range of very interesting display trees presented on the night, and an active review discussion on quite a few trees which were brought forward for critique.

The critique session of trees and containers covered quite a range of interesting bonsai. The photos below show some of the trees discussed, and we will be looking forward to seeing the continuing development of these, and the choices made in future containers.

And some other creative container ideas……..

Despite the chill of an unseasonably cold Spring day, a good number of members came along for the workshop and critique night to work on trees and to take part in the review and development of several trees brought up for discussion.

Plants on the display table included the following:

Several trees were brought up by members for critique and assistance with styling work, while others continued working on their trees.

The club also had a look at possible use of old wood burls as tree containers, and a new turntable being developed by Leigh.

The September meeting of VNBC was a series of photo presentations and tree work to bring to life all about the inspirations we find when we look at trees in some of their natural settings, and the possibilities of translating these inspirations into the bonsai which we develop.

Quentin and Marcela each showed a series of photos of trees of different species in natural or wild settings, and then proceeded to work on trees to show their interpretation of using the inspiration from these trees in developing new bonsai.

While those two worked on their trees, other examples of inspiring trees in nature, and their links to bonsai being developed, were shown by Rod and Kevin.

The March club meeting featured an excellent presentation by Mike Simonetto titled Bonsai – Propagation to “Finished”. This was a comprehensive presentation and discussion ranging from initial establishment of plants, from seed or other stock, through the early development and training stages, management of tree growth in the ground and in pots, and with a strong focus on development of style, new leaders for the trees, and encouraging the formation of good trunk taper. As in all presentations by experienced growers, there is always something for everyone to learn and to think about in their own development of bonsai, and Mike certainly gave us plenty of ideas and material for thought.

The display table was well stocked on the night, with quite a number of interesting trees presented and highlighted in discussion. The discussion of the display trees also developed some thoughts around species naming, and the challenges presented by continuing changes in the botanical names of quite a few of the Australian native species we have been using as bonsai. Now that’s a field for continuing future debate and occasional frustration!!

A night focused on Acacias – what a topic to dip our toes into! With nearly 1000 species of Acacia found across Australia, there is an extensive range of possibilities for bonsai, many of which we only dream about. There is just so much potential bonsai material amongst the Acacias that we can only report on experience and knowledge relating to a small proportion of the range of species. 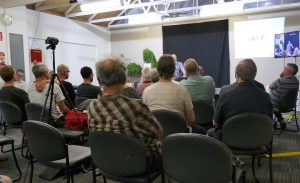 The presentations and demonstrations on the night, and the trees on display, provided an interesting grounding in growing Acacias as bonsai. Presentations by Kevin and Quentin covered the essentials of Acacia features, the differences found between species in growth habits, leaves (including the differences true bipinnate leaves, phyllodes and cladodes) and flower structures, and the natural and cultivation characteristics of a number of the species which club members are growing as bonsai. Quentin provided a fascinating demonstration of what can be done with a young untrained Acacia howittii grown in an ornamental container, converting a plant with a mass of foliage into one where the interesting trunk will have much more prominence, and not be obscured by excessive crown growth.

Several examples of wattles being grown as bonsai were reviewed, along with information about their natural growth characteristics and their appearance in the wild.

Some of the other trees on the display table included the following:

The AGM meeting for the VNBC was a good opportunity for the club to review what has happened over the past year, and to give some thought to the coming year as well. The President’s Report highlighted the range of interesting presentations and demonstrations at club meetings and workshops over the year, including three demonstrations under the AABC Visiting Tutor Program, and other specialist presenters as well. Other highlights for the year included the successful exhibition and sales weekend in April, the various workshops and critique sessions, and the pottery classes held as part of a couple of the Saturday workshops.

With the completion of AGM formalities, the remainder of the night consisted of a demonstration of deadwood bending, and a review of the progress in development of several trees which had been the subject of initial work as part of various demonstrations at previous club meetings.

The deadwood bending demonstration on a small Leptospermum juniperinum, which had a long-dead previous branch. This was wired, soaked in wet coverings for a few days prior to the night, and then unwrapped and heated with a blowtorch, followed by bending pressure to give the branch some more interesting movement.

These other trees from previous club demonstrations included:

Group planting of Moonah (Melaleuca lanceolata), first assembled at the National Symposium on Australian Natives as Bonsai, in Melbourne, 2015, with subsequent additional work at a club meeting.

Leptospermum laevigatum, Coastal Tea Tree, developed at the club’s AGM 2 years ago, in 2016.

And also, a Burgan dug from the wild, and remodeled by Albert Garcia during his visit early this year.